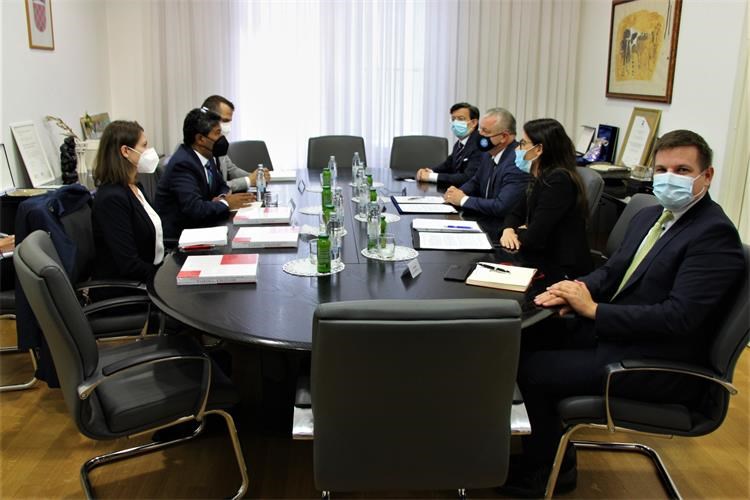 Last week Darko Horvat, minister of physical planning, construction and state property, held a meeting with Jehan Arulpragasam, Country Manager of the World Bank Office for Croatia. The main reason for his visit was related to the loan the Republic of Croatia received from the World Bank for the purpose of implementing post-earthquake recovery and reconstruction, as well as strengthening public health preparedness due to the coronavirus pandemic.

To recall, immediately after the Zagreb earthquake on 22 March 2020, Croatia started communication with the World Bank with the aim of securing a loan, and for this purpose a damage assessment document “Croatia Earthquake Rapid Damage and Needs Assessment 2020” was drafted. According to this assessment, the total damage to about 25,000 buildings in Zagreb and its surroundings amounts to some HRK 86 billion, which is more than 60% of the state budget.

The World Bank loan, worth a total of $200 million, will include a comprehensive reconstruction of facilities. The project's development goal is to help Croatia in the reconstruction after the earthquake in Zagreb and its surroundings, to improve its institutional capacities for reconstruction and strengthen its national systems for public health preparedness.

As part of the meeting between Minister Horvat and Country Manager Arulpragasam, key information on the progress of the project itself was presented, as well as the challenges the Republic of Croatia has been facing throughout the reconstruction process. However, one of the most important topics was the initiative of Minister Horvat, supported by the Ministry of Science and Education and the Ministry of Finance, on encompassing two secondary schools from Sisak-Moslavina County by this loan. To be specific, this refers to the construction of a completely new School of Economy in Sisak and a Secondary Vocational School in Petrinja.

This meeting was held as a part of a five-day working visit of a World Bank delegation, which visited the locations in the city of Zagreb and Sisak-Moslavina County that are most affected by the earthquake, and the reconstruction of which is planned with funds provided under the loan.

Members of the delegation also visited the University Hospital Centre Zagreb (Rebro), where they were received by KBC Director Ante Ćorušić, after which they also visited the University Hospital for Infectious Diseases “Dr. Fran Mihaljević”, accompanied by Director Alemka Markotić, with whom also a co-ordination meeting was held. It should be noted that individual units of both health care institutions will be reconstructed and renovated with funds of this loan.

The delegation spent the last two days of their working in the area of Sisak-Moslavina and Karlovac counties, visiting locations where the construction of new facilities will be carried out, as well as of schools that were damaged to the level of unfitness for use - the School of Economy in Sisak, the Secondary Vocational School in Petrinja and the Medical School in Karlovac.