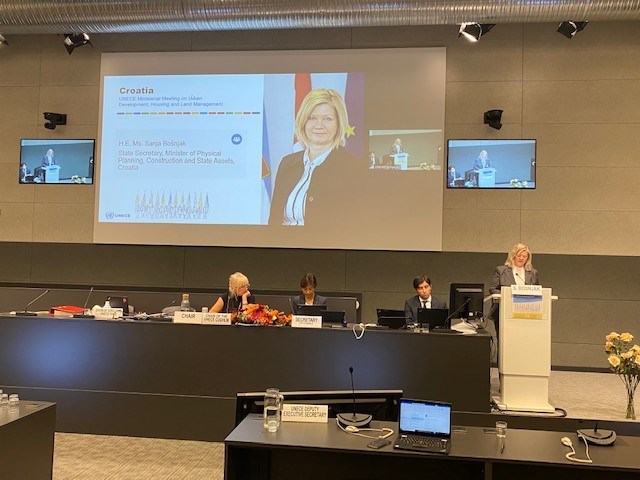 The Ministerial Meeting brought together over 400 participants from the ECE region, including forty senior officials, ministers, deputies, secretaries of state and representatives of permanent missions to the UN Office in Geneva. The meeting was accessible to the general public via a live video link on the UN website. The high representatives of the participating countries gave their opening statements, and on behalf of the Ministry of Physical Planning, Construction and State Assets of the Republic of Croatia the statement was given by State Secretary Bošnjak.

In terms of the central message of this year's Meeting: “Humanity is facing not one, but three intertwined crises: the COVID-19 pandemic, climate change and the lack of adequate and affordable housing”, the representatives of the countries deeply reflected and shared long-term, systematic visions on how to move forward and avoid the mistakes of the past.

State Secretary Bošnjak pointed out that the Republic of Croatia was hit by two devastating earthquakes in 2020, and that therefore Croatia is additionally faced with the challenging process of reconstructing the areas affected by the earthquakes.

The conclusion of the Ministerial Meeting was the endorsement of the document “Place and Life in UNECE – Regional Action Plan 2030”, which identifies specific measures to address the challenges posed by the COVID-19 pandemic, as well as climate and housing emergencies.

As part of State Secretary Bošnjak’s official trip to Switzerland, on October 8 she met with the Director of the Federal Office for Buildings and Logistics, Mr Pierre Broye in Bern. The meeting was also attended by Ms Andrea Bekić, PhD, Ambassador of the Republic of Croatia to Switzerland.

After presentations made by the participants on both sides, State Secretary Bošnjak pointed out numerous similarities between the Croatian and Swiss model of state-owned assets management. Based on the suggestion of Ambassador Bekić, an initiative was launched to establish further cooperation between the Ministry of Physical Planning, Construction and State Assets and the Federal Office for Buildings and Logistics in Bern.