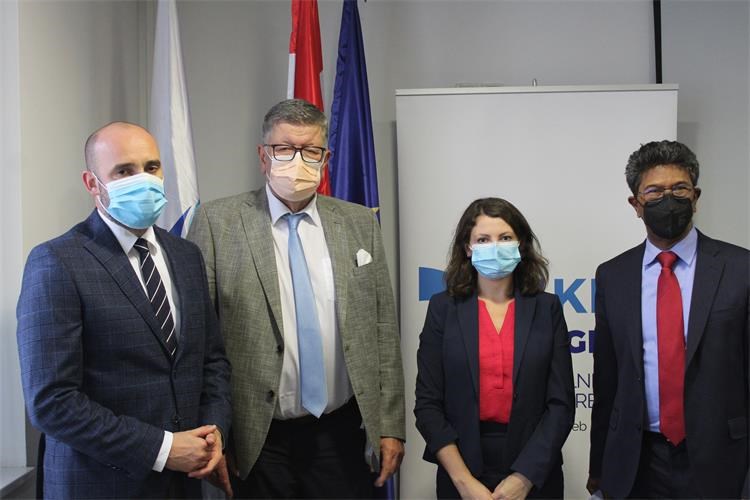 (Hina) - Physical Planning, Construction and State Assets Minister Ivan Paladina on Monday signed a contract for designing a new, multifunctional building of the KBC Zagreb hospital complex, which would also house the hospital's departments located in the city's Šalata neighbourhood, damaged in the March 2020 earthquake.

A €70 million reconstruction contract for the project "Rebro - Stage III" was signed in March.

"The €70 million World Bank loan and close to €20 million under the National Recovery and Resilience Plan, to be used to equip the future KBC Zagreb building, are the best proof of the importance this government attaches to the health system," said Health Minister Vili Beroš.

The new section of the KBC Zagreb hospital will have eight storeys to house the departments of orthopedics, dermatovenerology, ophtalmology, transfusion medicine and transplant biology with a tissue and cell bank. The building will also include a hospital pharmacy with a warehouse, the central kitchen for the KBC Zagreb complex, and rooms for student education. An open, 31,370 square metre garage with a helidrome and new access roads will be built as well.

The signing of the contract was attended by World Bank Director for Croatia Jehan Arulpragasam and Zuzana Stanton-Geddes, project director and her associates, Physical Planning, Construction and State Assets Ministry State Secretary Željko Uhlir, KBC Zagreb Hospital staff, and representatives of the consortium that will make the design for the new wing of the hospital complex.

Paladina said that the project to reconstruct and renovate KBC Zagreb was an example of good cooperation between the World Bank, the KBC Zagreb management, the competent ministries and professionals.

Jehan Arulpragasam said that the World Bank was happy to be able to help Croatia after the 2020 earthquakes by providing financial and technical support.

In July 2020, Croatia and the International Bank for Reconstruction and Development  signed a loan agreement for the post-earthquake reconstruction and enhancing preparedness of the public health system, worth close to €184 million.

Of that amount, 60% will be spent on the health system, reconstruction of buildings and strengthening of its resilience, as part of which projects have been launched to reconstruct KBC Zagreb and the Croatian Public Health Institute building.