High-Level Meeting with the European Commission 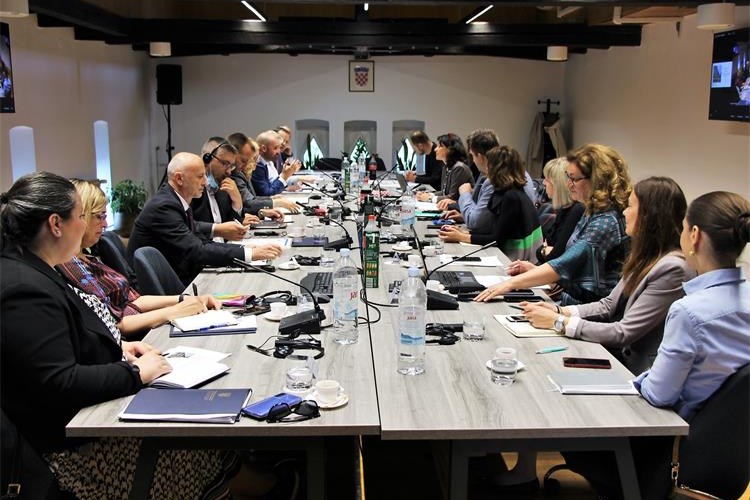 On 1 June 2022, the fourth High-Level Meeting with the European Commission on post-earthquake rebuilding and recovery was held at the Ministry of Physical Planning, Construction and State Assets.

The meeting was held as a hybrid one and, in addition to the physically present participants, it gathered a large number of representatives of different European Commission directorates and Croatian bodies involved in the implementation of reconstruction by using funds from the EU Solidarity Fund (EUSF) and the National Recovery and Resilience Plan (NRRP).

The aim of the meeting was to exchange information on the state of implementation of EU Solidarity Fund aid with bodies involved in the implementation system, to identify challenges and bottlenecks, and review measures taken at the national level. Minister Paladina stressed that this Ministry is responsible for coordinating not only of aid from the EUSF but also of the Flagship initiative No. 6 Renovation of buildings under the NRRP, which puts us at the centre of the process. Challenges continue to be large, concrete steps are being taken from the state level with the aim of facilitating the procurement and contracting of projects financed by the EUSF and approving over-contracting of approved allocations, however the situation on the global materials and energy market, uncertainty of delivery deadlines and, consequently, a significant increase in construction prices substantially complicate contracting and slow down all administrative procedures.

Director Alves invited Croatian participants to be flexible in using the funds of the EUSF and combining them with other funding sources in order to make maximum use of all available funds. She underlined the importance of systematic monitoring of the absorption of funds from the EUSF, which has the shortest implementation period, but also the necessity for absorption planning to be realistic, and efforts to focus to a greater extent on the implementation of operations, and to a lesser extent on their administration. She emphasised that the EUSF was a fund that ensured quick post-earthquake response and assistance, not including complex administrative processes but simple ones, while complying with the obligation to justify eligible costs.

Director Alves concluded that Croatia had made some positive progress in the implementation of the EUSF, however that it was necessary to intensify the absorption of funds from the EUSF and to closely monitor projects financed from multiple sources. The Commission will provide the necessary support through the next technical and high-level meetings. Minister Paladina thanked the European Commission for its cooperation so far, and called for further exchange of information, particularly in the part of experiences of states in which there was a price increase as well as related to the same challenges and the way to address them in order to overcome market disruptions affecting construction.

A day before the high-level meeting, on 31 May 2022, a delegation of the European Commission headed by Director Sofia Alves, and accompanied by representatives of the Ministry of Physical Planning, Construction and State Assets headed by State Secretary Dunja Magaš and the City of Zagreb, visited several construction sites of infrastructure facilities whose reconstruction is financed by the EU Solidarity Fund.

The tour began with a visit to the construction site for the reconstruction of water supply and drainage on Jabukovac, Paunovac and Slavujevac streets in the Tuškanac area.

By visiting the construction site on the pedestrian bridge in the extension of Savska street, the representatives of the European Commission were informed about the condition of the bridge before the earthquake, the work that has been completed so far and the remaining works that will be completed before the end of the current year.