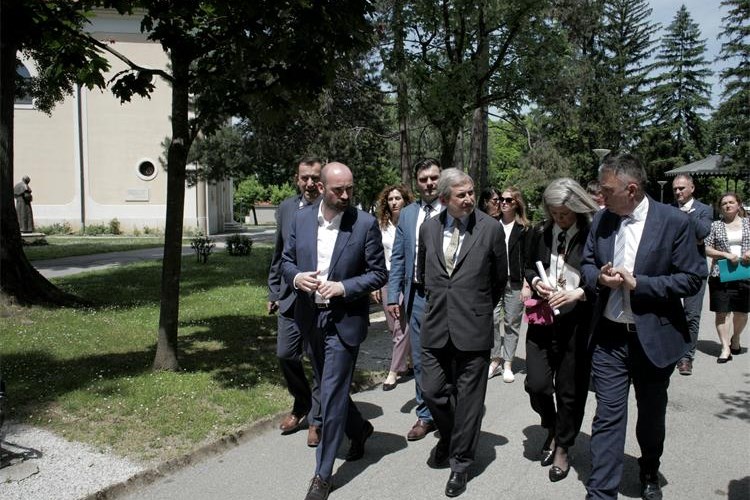 European Commissioner Johannes Hahn said in Petrinja, a city hit by two strong earthquakes, that these were the moments when European solidarity was expressed and therefore the European Commission extended the deadline for the use of European Union Solidarity Fund (EUSF) funds to remedy the earthquake damages until the end of June 2023.

Croatia received over EUR one billion from the European Union Solidarity Fund to rehabilitate the consequences of two earthquakes that hit Zagreb and Sisak-Moslavina County. The usual deadline for using these funds is 18 months and, in this case, expires in June of this year.

Hahn expressed full understanding of the Croatian government's request for extension of the deadline for the use of funds from the European Union Solidarity Fund, saying that “there are rarely two earthquakes within one year” and that we also had a pandemic, and now we are witnessing disruptions in supply chains, including construction materials, and increase of prices.

“I want to convey to Croatia the message that the Commission extended the deadline for the use of European Union Solidarity Fund (EUSF) funds to remedy earthquake damage until the end of June next year, so that the government, together with regional and local authorities, can complete the reconstruction,” the EC's budget and administration commissioner said.

He said he had seen many natural disasters, floods and earthquakes, but it was always painful to see it again, especially in a city and region that had been hit by disasters in recent history, from World War II to the Homeland War and finally the earthquake.

"I would like to thank the inhabitants for their courage and for always rising again to rebuild their homes with the help of the public and the European family. This is a time when European solidarity is needed and therefore, I hope that the homes will be restored quickly and that people will return to them as soon as possible," Hahn said.

He said that in talks with people in a container settlement he heard that they wanted to stay in the place where they were born and grew up.

"We will do everything possible to enable them to do so. Now we must not waste time,” said Hahn, adding that “people should be kept and not forgotten.”

He expressed his satisfaction with the fact that at city revitalisation works many experts in cultural heritage reconstruction have been engaged.

He also said he would return to Petrinja before the end of his mandate to see how much work has been done. “But also, as a sign of encouragement that you are not alone, and that Europe is on your side. Whatever we can do, we will do," Hahn said after a tour of the city.

Ivan Paladina, minister of physical planning, construction and state property, said that by extending the deadline for the use of funds from the EUSF, the Commission showed a great understanding of the specificity of the Croatian situation, since reconstruction has been taking place after two series of earthquakes and during the Covid-19 pandemic.

"This has significantly influenced the reconstruction process and certainly has partially slowed it down. It is up to us now to use as much as possible from the available amount from the Solidarity Fund by June 2023," Paladina said.

Gordan Hanžek, state secretary at the Central State Office for Reconstruction and Housing Provision, informed that works on the construction of 53 replacement family houses had commenced and that more than 200 family houses were expected to be under construction by August.