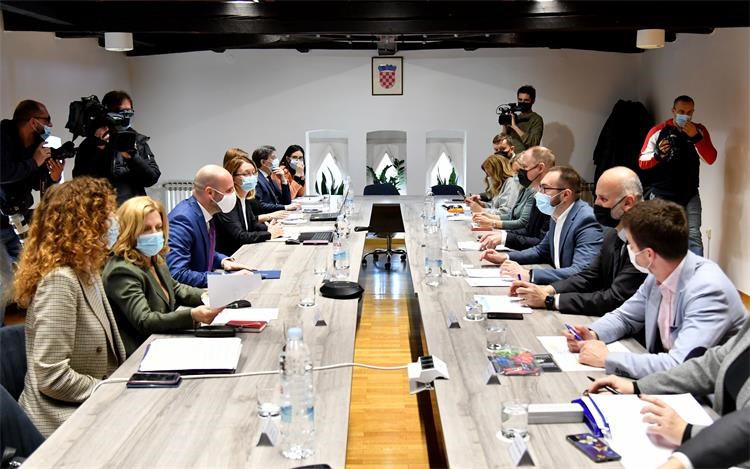 (Hina) - Construction Minister Ivan Paladina and Zagreb Mayor Tomislav Tomašević on Monday held their first meeting on the reconstruction of public and private buildings in Zagreb, damaged in the March 2020 quake, and agreed on regular meetings between city and ministry officials, to be held on Fridays.

Describing today's meeting as very concrete and held in the spirit of cooperation, Paladina said that their goal was for every new meeting to help resolve some of the topics discussed.

He noted that citizens were definitely unhappy with the pace of reconstruction but that he would do his best to facilitate the process and that work was being launched on a larger number of projects.

"Construction work on several buildings begins in April and design work is underway on 30 buildings. Tenders for contractors will be published in the coming months," the minister said, announcing that the construction of a substitute house and the seismic retrofitting of the first apartment building would begin in April.

The minister said that in the coming period reconstruction-related activities would definitely be stepped up and that concrete changes would be presented in mid-April, noting that currently work was underway on resolving individual issues related to public procurement and the dynamic of certain procedures.

Mayor: Nobody can be satisfied with current pace of reconstruction

Mayor Tomašević said that the meeting was attended by a broad range of officials as they wanted to strategically define certain topics to be dealt with operationally by a broad circle of people from different city offices and ministries.

He said the topics discussed were the current pace of reconstruction, absorption of money from the EU Solidarity Fund for the reconstruction of public buildings, notably in light of the fact that the deadline for absorption should be extended, temporary accommodation for citizens whose properties are to undergo seismic retrofitting, and a construction waste depot, to be located near the city wastewater processing plant.

Tomašević repeated that nobody could be satisfied with the current pace of reconstruction, noting that in 2021 the city secured around HRK 80 million for the co-financing of reconstruction work on private buildings, of which almost none has been spent so far, while this year, HRK 160 million has been 'optimistically' secured.

Tomašević said that the start of reconstruction work on houses had been shifted to April due to problems with public procurement, expressing hope that decisions would be made and implemented faster.