Reconstruction of earthquake-damaged buildings in the area of Sisak-Moslavina County, Karlovac County and Zagreb County

This page contains basic information on the reconstruction and removal of damaged buildings, in accordance with the established degree of damage, as a result of the devastating earthquakes in 2020. 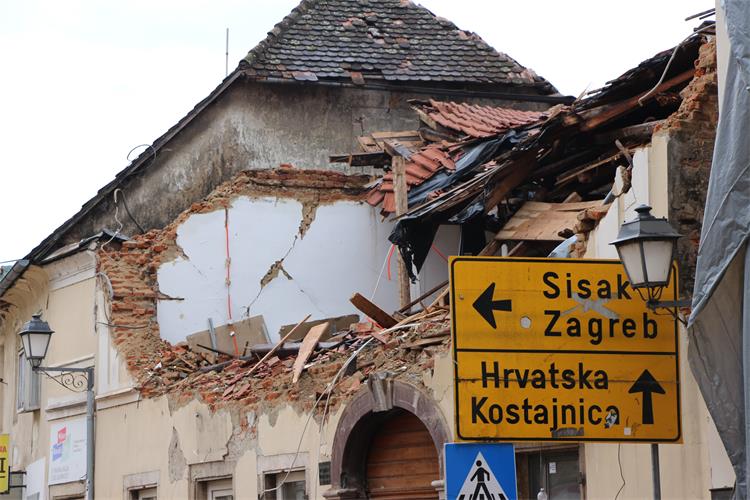 
How to reconstruct and recover funds?


Persons who owned and co-owned buildings that were damaged by the earthquakes in the territory of the City of Zagreb, Krapina-Zagorje, Zagreb, Sisak-Moslavina and Karlovac Counties on 22 March 2020 and 28 and 29 December 2020 may, under certain conditions, exercise the following rights to:

The respective application forms can be downloaded and shall, upon completion, be
submitted to the Ministry of Physical Planning, Construction and State Assets in Zagreb, Ulica Republike Austrije 20:

By 21 July 2021, the Ministry received 12,300 applications for the reconstruction or removal of buildings, construction of replacement houses, awarding of monetary assistance or exemption from the owner's financial obligation. 330 reconstruction decisions were issued and forwarded to the Reconstruction Fund as the operational body for implementation.

Citizens who have on their own started urgent damage repair on roofs, chimneys, gables, elevators and staircases are entitled to a refund of their money. In order to be eligible for reimbursement, it is necessary to:
Applications completed on FORM 5 shall be submitted by the owner, co-owner, representative of the co-owners or the manager of the multi-apartment or commercial building.

At the same time, as of 3 May 2021, the Central Office for Reconstruction and Housing Provision has started works in the Banovina region. The first activities relate to the repair of non-structural elements in the area declared as disaster-struck for which more than 5 thousand applications for priority repair of family houses in 29 local self-government units have been received. They refer primarily to damage to chimneys and gable walls on houses with green labels in which their owners live, and the goal is to enable the houses for living before the next heating season. More information is available at: https://sduosz.gov.hr/


The academic community participates in the drafting of type solutions

Minister Horvat held a series of meetings with representatives of the academic community and sectoral chamber. This is the continuation of an open dialogue led by the government with the representatives of the profession in order to find, as soon as possible, adequate solutions to be used during organized reconstruction in earthquake-stricken areas.

On 4 March 2021, at the premises of the Croatian Employers' Association, a meeting was held by Minister Horvat with representatives of the construction material industry regarding the modalities of construction of replacement houses in the Banovina area.

At a meeting held on 15 February 2021, a preliminary report of the Mining-Geological-Oil Faculty related to the safety of construction in the area of Sisak-Moslavina County was presented, which will be the basis for geo-technical research works and ultimately for construction and reconstruction in the earthquake-devastated areas.

For the area of Sisak, Petrinja and Glina so-called green zones were established where houses can be reconstructed and replacement houses built, since after the earthquakes sinkholes and landslides appeared. On the basis of geophysical works, areas of safe construction and reconstruction have been determined for the towns of Mečenčani and Borojevići, while on the other hand, considering the appeared sinkholes, insecure areas have been singled out.

The next phases refer to the expansion of these “green zones” on maps in the coming weeks, with the inflow and processing of new data, because not all areas have been processed yet. This will also be the basis for the construction profession to continue with geo-technical research works as well as reconstruction and construction.

After the first maps of geologists related to construction safety were presented, the Faculty of Civil Engineering has the task of preparing geotechnical research works, and in several municipalities in Sisak-Moslavina County this preparation has already been initiated.

In parallel, budget calculations for type solutions of residential houses are also being prepared.

Civil Protection Headquarters for the elimination of the consequences of earthquakes in the Sisak-Moslavina, Karlovac and Zagreb Counties

The Government has established a Civil Protection Headquarters to remove the consequences of earthquakes in Sisak-Moslavina, Karlovac and Zagreb Counties. Deputy Prime Minister and Minister of Croatian Veterans Tomo Medved was given the authority to lead the operation of the Headquarters in the part relating to the alleviation of the consequences of the earthquake-caused disaster in the area of Sisak-Moslavina and neighbouring counties, while Deputy Prime Minister Boris Milošević and Minister of Physical Planning, Construction and State Assets Darko Horvat were appointed his deputies.

The Headquarters coordinates activities in the earthquake-stricken area and citizens can be informed about its work via the website: https://potresinfo.gov.hr/ where information on the removal of the consequences of the earthquake disaster in the area was published.

Pursuant to Government decision of 18 February 2021, the Ministry issued a new public call for rent financing which was open for applications from 12 March 2021 to 11 May 2021. Under the call, 239 applications were received, and by 13 July 2021, 184 decisions were issued, out of which 170 were positive and 14 negative. The monthly rent payment for replacement apartments includes 389 persons.

All additional information on rent financing can be obtained every working day from 8:30 to 12:30 hrs by phone: 01/6448-900 or by email: financiranje.najamnine@mpgi.hr

The damages caused by the earthquakes are enormous: HRK 86 billion for Zagreb and its surrounding area and HRK 41.6 billion for the Banovina region, which totals about HRK 128 billion.

The Government adopted the National recovery and Resistance Plan 2021-2023. (NPOO) and submitted it for approval to the European Commission on 14 May 2021. An integral part of the National Recovery and Resilience Plan 2021-2023 is the chapter on financing the reconstruction of earthquake-damaged buildings along with energy renovation in the area of the City of Zagreb, Krapina-Zagorje, Zagreb, Sisak-Moslavina and Karlovac Counties.

At the same time, the document Rapid Damage and Needs Assessment for earthquake-struck areas of December 2020 was prepared. On the basis of this document the Ministry of Regional Development and EU Funds submitted on 18 March 2021 an application by the Republic of Croatia for financial assistance for reconstruction from the European Union Solidarity Fund.

In addition, in December 2020 the Government of the Republic of Croatia passed decisions on funds for alleviating and partially removing the consequences of damage to Sisak-Moslavina County, Zagreb County and Karlovac County in the total amount of HRK 120 million. Out of these funds, HRK 100 million has been allocated to Sisak-Moslavina County, HRK 10 million to Zagreb County, while following the assignment by the Environmental Protection and Energy Efficiency Fund, Karlovac County and Zagreb County each receive HRK 5 million from the Fund.

Counties, towns and municipalities ensure the direction and earmarked use of these funds, therefore, for all additional information, residents should contact the municipality or town in the area where the damaged property is located.

The State aid scheme for compensation of damage caused by the earthquakes in the City of Zagreb, Krapina-Zagorje County, Zagreb County, Sisak-Moslavina County and Karlovac County entered into force on 14 June 2021. The scheme defines the objectives, conditions and procedures for granting state aid for compensation of damages on commercial buildings and parts of buildings in which economic activity takes place, resulting from the earthquake of 22 March 2020 in Zagreb and its surroundings and the earthquakes of 28 and 29 December 2020 with an epicentre in the City of Petrinja.


Additional information and assistance to citizens

In case of any questions or doubts, citizens can contact the Ministry in its displaced officed located in Sisak, Petrinja, Glina, Hrvatska Kostajnica and Lekenik, where they can get all relevant information, as well as advice on the reconstruction process. Information can also be obtained by phone 01/3782 117 and by e-mail: potres@mpgi.hr

Legal aid can be requested from the Law Clinic of the Faculty of Law in Zagreb, every working day from 10 to 12 hours, and on Wednesdays and Thursdays also from 17 to 19 hours on the number 097 6529 903. More information is available here.

Tenants and users from the territory of Sisak-Moslavina, Karlovac, Zagreb, Krapina-Zagorje Counties and the City of Zagreb are exempt from the obligation to pay lease, rent and fees for the use of earthquake-damaged state-owned apartments and business premises. The respective decision was passed by the Government on 4 March 2021 and thereupon also by the Assembly of the State Property Company Ltd.

Tenants and users of state property are exempt from payment as of January of this year until the reusability of earthquake-damaged business premises and apartments.

Tenants, lessees and users of real estate are exempt from payment obligations for real estate that have been attributed the damage degree of unfit for use (codes N1 and N2) and thus do not use the premises.

On 1 June 2021, the number of beneficiaries exempted from payment obligations: 32 users of business premises and 63 users of state-owned apartments managed by the Company.

In Sisak-Moslavina County, structures with 117 units managed by the State Property Company were examined, and 65 damaged units (apartments and business premises marked with yellow or red labels) were recorded. Damaged units (ST and PP) that are in the Company’s portfolio, except those mentioned for the development of the study that are to 100% ownership of the Republic of Croatia, are in multi-apartment buildings in which the Republic of Croatia is one of the co-owners and necessary activities are undertaken.

In accordance with the Act on the Reconstruction of Earthquake-Damaged Buildings and the Programme of measures for the reconstruction of earthquake-damaged buildings, the removal of damaged buildings that are in the portfolio of the State Property Company Ltd. and 100% owned by the Republic of Croatia is carried out according to decisions of the Ministry of Physical Planning, Construction and State Assets, after the Society obtains the developed study on the assessment of the existing state of the construction structure, if removal (complete or partial) is determined according to the results of the study.

For buildings under the competence of the Society 5 studies for Petrinja have been prepared so far, and in the findings of these studies removal or partial removal of facilities has been determined. One study for a building in Karlovac (Zrinski trg 21/Šetalište Franje Tuđmana seaside 11). The study on the assessment of the existing state is currently being prepared for a structure in Sisak. The report on the examination of mechanical resistance and stability after the earthquake in Petrinja was completed for a multi-state apartment building in Kutina.

Following the decisions of the Ministry of Physical Planning, Construction and State Assets and the Civil Protection Headquarters in Petrinja, four buildings were removed/partially removed at the addresses: Trg hrvatskih branitelja, Trg Petra Preradovića and Ulica Vladimira Nazora.

he Ministry issued the following approvals for the removal of buildings owned by the Republic of Croatia (Directorate for Real Estate Management and Disposal):

The online Geoinformation system “Earthquake” was established and developed by the Geodetic Faculty of the University of Zagreb in co-operation with the State Geodetic Administration and the SDURD. The system is used by the Civil Protection Headquarters to monitor the situation in the field.

An official Treasury account for fund donations in the “Assistance for Post-Earthquakes Reconstruction” fund-raising campaign has been opened.